Puzzle Paradise
About the authors

1 e4 e5
Update August 2008
with GM Tony Kosten
I'm back from a fairly successful Summer, chess-wise, and in this update I will be looking at a few of my experiences with Black over this period. I was reasonably happy with 1 e4 e5 over the two months as Black, but even happier with 1 e4 e5 as White!
I am also going to have another look at Gajewski's Opening, which has been coming on in leaps and bounds, and Kevin will examine Colman's Variation.

A move that had first been played in April, apparently, and that he had previously analysed. However, although he erred quite quickly and the game turned into a complete rout, this move is interesting and may have a future, see the notes to Vitoux, C - Kosten, A.

Only a couple of days later I was surprised to see very the same opening on the big screens in the Pau Conference Centre, but this time White played more commonly: 11 Bb2 Bg7 12 Nd2 Nb4 13 0-0-0!?:

This may well be White's most accurate move here, sacrificing a pawn to complete his development, see the analysis in the note to move 13, but in this game Black innovated and actually refused to take the pawn! Just a few moves later Black had achieved a significant advantage before the game dissolved into a mass of complications, White having two queens (!) for a while, see the exciting tussle Abergel, T - Maze, S.

As an interesting addendum, I play in the same team as Vladimir Baklan in both Austria and France, and one day I asked him why he and his training partner Rublevsky have stopped playing the Scotch? To my surprise he said that it wasn't because of 4...Bc5 (as I had thought, after the Rublevsky - Grischuk match) but rather because of 4...Nf6, and that they felt both 8..Ba6 and 8..Nb6 were fine for Black. Food for thought!

Cast your mind back to Olivier Renet's excellent November 2005 update, where he showed that both 5...Ng4 and 5..Ne4 were playable alternatives to the automatic 5...d5. Now, I rely entirely on ChessPublishing for my opening ideas, and hadn't forgotten his analysis, and so I was very happy to have a couple of opportunities to test his ideas this Summer.

In fact, my victory in the Avoine tournament was in a large part due to the game Pap, M - Kosten, A which followed the mainline 6 O-O d6 7 exd6 Bxd6 8 Re1+ Kf8! that Olivier had analysed, although my opponent now played the new(ish) move 9 Bb5!?:

I say 'newish' because after the game Eric informed me that Pap had already played this same idea a few days before, at the Nimes tournament! I am not sure he will play it again, though, as only a few moves later White was in serious trouble, and I won easily. 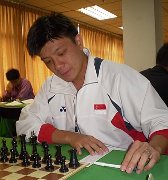 Olimpiu G. Urcan's Surviving Changi: E.E. Colman - A Chess Biography (SHS, Singapore, 2007 - see http://www.newinchess.com/Surviving_Changi-p-1562.html) ably reconstructs the life of E.E Colman (1878-1964), a British colonial officer and an enthusiastic chess expert for more than half of a century, who lived most of his life in Singapore. During the Japanese occupation (1942-1945) Colman, like thousands of other Western civilians, was interned at the infamous Changi Jail. It was there that he promoted the game of chess among his fellow inmates, primarily as a form of relaxation but also as a way to keep the mind sane in the midst of complex hardships. It was also there that Colman invented his 8...Rb8 in the Two Knights' Defence (today commonly referred to as the "Colman Variation") which he kept secret and took with him to London after his liberation. And it is the Colman Variation which is the subject of the next 3 games:

In order to know more about the Colman Variation and its' many intricacies, Urcan even organized a correspondence chess tournament aptly termed the "E.E Colman Cup" and analyzed the games in NIC yearbook 86. I've used Urcan & Ceterus's article as a reference where necessary.

Another idea that caught my interest on this site was Trifunovic's old line 7...dxc6!?, which was examined by Nigel Davies in his Feb '05 Update, and to be fair it has served me well over the last couple of years.

I only use it as a very occasional surprise weapon, though, and only against strong players (as White has a forced draw if he wants it) but may have to rethink this after the game Hamdouchi, H - Kosten, A, where the African Champion played the new computer-inspired idea 8 dxe5 Nf5 9 Rd1 Bd7 10 g4!? Nh4 11 Nxh4 Bxh4 12 g5 Qe7 13 Rd4!?:

Which wins two pieces for a rook and pawn.

I was 'gobsmacked' (I think this means 'very surprised'!) to see that a young lad from our local club was playing this in a recent tournament, and so had a look at the latest games, to see that, yes indeed, the Gajewski really has filtered down into the lower echelons and, I suppose, is starting to lose it's surprise value, and become a 'serious opening'! So time for another update.

Can Black get enough compensation? Finally, another exciting game from the inventor himself that helps to answer that question: Kononenko, D - Gajewski, G.

Black may have to turn his attention to 11...Nxe4 instead, see the note to the Gajewski game.

Peter Wells will be here next month, all the best, Tony

Please post your Kingpawn Opening queries on the 1 e4 e5 Forum, or subscribers can write to tonykosten@chesspublishing.com if you have any questions.