Hi, I became an International master in 1985, and a Grandmaster in 1990. I have played many times for the French national team, and have been French Teams Champion 8 times with Paris club Clichy.

I am currently training the French youth team, and in the past I have been part of Korchnoi's training team and was also a member of Karpov's preparatory team for his World Championship match against Garry Kasparov in New York and Lyon.

I am married with two children. 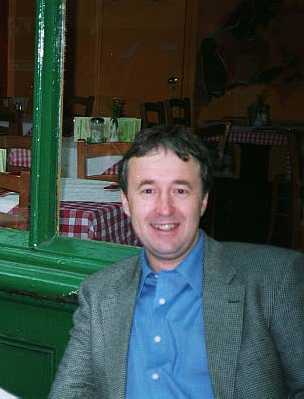 Strong English/Welsh GM Nigel took control of this site in Jan 2003, as Paul had some health problems and couldn't find the time to write as much as he wanted to.

Here we see Nige in typical jovial mood. He hopes to bring his renowned inventiveness to this portion of ChessPublishing.com!

He has extensive experience in the Pirc/Modern Defence (including wins over Anand and Larsen with the latter), and has also played these systems with colours reversed, to great effect.

Nigel is well-known for his ability as a trainer, and is currently writing a book on Alekhine's Defence.

Nigel writes: "between writing updates I can often be found in the pubs in Southport, and I have a dog called 'Nimzo'"!

Some memorable moments & other "snippets"

A consultation game played blindfold in a cable car 11,000 feet up! That was during the 1987 "Snow Cup" team tournament in Aosta, Italy.

2) At the Manila Olympiad on Wednesday 17 June 1992 when Chris Morrison, the Scottish team captain, told me that I would be awarded the title of International Grandmaster (Scotland's first).

1) Falling asleep against Colin McNab during a long rook endgame in 1977. I woke up to the sound of the flag falling!

2) Arbiter Harry Golombek falling asleep during my marathon encounter with John Cox at the 1982 Robert Silk tournament. John and I eventually woke him up to report that I'd won!

3) Water dripping onto the board in my game against Harel Elyoseph at the 1980 European Junior Championship. My Israeli opponent had gone to wash his face, but forgot about drying!

1) Nearly falling over the edge of a waterfall during a tournament in Iceland in 1992.

2) Being trapped in a lift for 40 minutes during the 1981 World Junior Championship in Mexico City.

3) Being in a plummeting lift (several times!) during the 1994 Moscow Olympiad.